The following is an abstract of a study done by Dr. Ralph M. Trüeb on the harmful effects of sun exposure. His research indicates that sustained ultraviolet radiation on an unprotected scalp can damage the skin cells in the scalp as well as the cells of the hair follicles.

Is Androgenetic Alopecia a Photoaggravated Dermatosis?

Progressive thinning of the scalp hair in androgenetic alopecia (AGA) results in a gradual decline in natural protection of the scalp from ultraviolet radiation (UVR). A number of pathologic conditions of the scalp are evidently related to UVR, particularly photosensitive diseases and disorders of the chronically photodamaged bald scalp.

The most important chronic effects of UVR are photocarcinogenesis and solar elastosis. Besides these, erosive pustular dermatosis and 'red scalp' are distinct disorders peculiar to the balding scalp. While the consequences of sustained UVR on the unprotected scalp are well appreciated, the effects of UVR on hair loss have widely been ignored. However, clinical observations and theoretical considerations suggest that UVR may have negative effects: acute telogen effluvium from UVR has been described, and the production of porphyrins by Propionibacterium sp. in the pilosebaceous duct, with photoactivation of porphyrins leading to oxidative tissue injury, has been implicated in follicular microinflammation.

Alternatively, keratinocytes themselves may respond to physicochemical stress from UVR, besides irritants and pollutants, by producing radical oxygen species and nitric oxide and by releasing proinflammatory cytokines, eventually leading to injury of the putative site of follicular stem cells in the superficial portion of the hair follicle. Since all of these processes involved in hair loss share the common feature that they are induced or exacerbated by exposure to sunlight, it is proposed that AGA is a photoaggravated dermatosis that requires photoprotection.

Dermatosis - Any disease of the skin in which inflammation is not necessarily a feature. It's characterized by reddish papules, slowly progressive eruptions, and itching.

I spent many happy years on the beaches of Southern California - Santa Monica (Muscle Beach), Venice, Huntington Beach (now officially called Surf City), and Manhattan Beach - so I know something about the sun and how it can damage the skin.

There is no doubt that the sun feels good, and it's fun to cavort around in a bathing suit absorbing all its "friendly" ultraviolet radiation. In reality, though, the sun is not skin-friendly. The damage the sun produces in the skin, hair, and eyes is cumulative. It builds up over the years making our hair less luxuriant, our skin less clear and resilient, and our vision less sharp.

The light we get from the sun is organized by the different wavelengths. UVA has a wavelength that is longer than UVB. Neither one of these wavelengths is visible to the human eye. UVA is responsible for about 20 percent of a sunburn; UVB is responsible for about 80 percent of a sunburn. Both of these wavelengths in the spectrum will give you a tan that will minimally protect against UVB induced sunburn. All this sounds harmless enough. After all, everyone gets a little sunburn once in a while. And some people actually get a good tan.

Now the bad news. UVA, which can penetrate glass, can also penetrate up to 250 micrometers into the skin. (UVB penetrates only 20 to 50 micrometers into the skin.) The earlier sunscreens would let this UVA through, protecting people from just the UVB radiation. Modern "broad spectrum" sunscreens give protection (but not complete protection) from both wavelengths. Research has now indicated that UVA has a disastrous effect on a molecular level, damaging the DNA in the cell nucleus and also damaging the cell membrane - the covering of the cell. The result of this is premature aging and wrinkling of the skin (Hair follicles are really just specialized skin cells), and a heightened susceptibility to the various types of skin cancer as we age. There's also a heightened susceptibility to cataracts, too, if protective sun glasses are not used while in the glare of the sun.

So what's to be done if we want to keep our skin looking young and healthy? The answer is simple in theory but not in practice. Stay out of the sun between 10 a.m. and 4 p.m. - when damage from the sun is at it peak. And if you do go out in the sun in these hours use some broad spectrum sunscreen properly applied, and wear some protective (not a wet T-shirt) clothing - and a broad-brim hat. 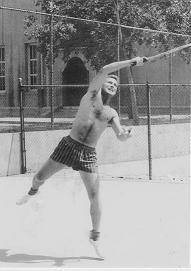 Don't do this! I played tennis almost every day for hours in the California sun - and without any kind of protection. My skin didn't get too messed up, but it would have been healthier without all that UVA and UVB radiation. Paula Begoun, where were you when I needed you? Please read her chapter 5, called "Sun Sense" in The Beauty Bible. This is the best, most comprehensive essay on the dangers of sun exposure that I've seen. The 36 pages in this chapter should be read every time you start contemplating getting a good tan. Paula does not think there is such a thing as a "good" tan.

A few months ago I went ballroom dancing where the lights were dimmed low. Two women who I never saw before were sitting together. They both had deep tans - perhaps they were on a cruise together. Under the dim lights when I danced with them, they looked beautiful. When the lights became brighter, however, I could see the signs of sun-damaged skin especially in the older woman - small wrinkles, dryness, and lack of elasticity. The younger woman's skin had only minor damage. Of course I did not go into my lecture on sun damage. I stayed with the subject of how good the music was.

My opinion is that there is only one thing worse for the skin and hair than prolonged unprotected sun exposure. That one thing is sun-tanning machines. Don't believe the advertising that tells you how "safe" these machines are.