Many articles on various Web sites suggest that a good personality is more important than a good head of hair, or that bald is beautiful. All that is probably true, but still you don't often see the bald guy with the fat belly getting the last dance with the blonde. Sometimes a few hairs sprouting from the scalp, and tight abs do make a difference.

There are times, of course, when personality does rule, but not often on first dates. Marty usually strikes out on these occasions. Image does matter and not just on first dates. When was the last time you saw a bald man running for president of the United States or, for that matter, any country? CEOs of corporations can be as bald as a billiard and as ugly as sin, but the president of the United States has to appeal to women as well as to men. Many women seem to be turned off by a bald pate even if the candidate promises them the moon and the stars, and free child care.

Men in general are tough though. We can take rejection even if we don't like it. But with women it is a different story. I've read many of the emails on various hair loss forums from women who are experiencing diffuse thinning. These women are suffering deep pain when they see their beauty vanishing. They know (incorrectly) that that's all there is, as the song goes.

Hair loss, especially for younger men and older women, is a serious subject. Gratuitous humor does not often carry the day around the hair restoration clinics. There are no smiles when a person feels rejected because of looks rather than of character. 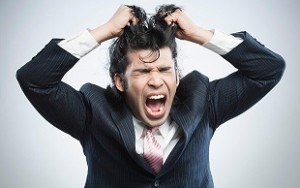 As the reader will probably gather by now, I had problems with my hair loss. I was more angry than hurt though. What was that line from Taxi Driver? "Are you talking to me?" That's the way I felt. When I finally got my hair into good condition, my anger vanished and my self-image flourished.

One quick item about getting interested in hair. It is no secret, when you are losing your hair you become interested in hair in a hurry. Probably most scientists and doctors doing research or specializing in the treatment for hair loss had their own hair problems. Many of them still have these problems.

If you are really unhappy with any part of your appearance, like your hair, your face, or your belly, these negative thoughts will have a large impact on your moods and emotions. Self-acceptance is important if you want to get on in life.