Vegetables such as broccoli, Brussels sprouts, kale, and cauliflower produce a chemical when being digested that inhibits the action of dihydrotestosterone (DHT). Leonard Bjeldanes, professor of nutritional science at UC Berkeley, and Gary Firestone, professor of molecular biology at the same institution, have been researching the anti-cancer properties of plant chemicals (phytochemicals). They found that vegetables such as broccoli and Brussels sprouts are rich in an indole called I3C. An indole is a decomposition product of proteins. The body converts this indole into diindolylmethane or simply DIM during digestion.

Further research confirmed that this DIM inhibits the action of DHT. It does this by binding to the same receptors within the cell that DHT uses. DHT, as I’m sure most visitors to this site are aware of, is involved in male pattern baldness. The research that Bjeldanes and Firestone are doing is mostly centered on prostate cancer and the proliferation of cancer cells, but Dr. Bjeldanes in an email to me wrote that he is now requesting funding to do research on male pattern baldness.

The reason that I stress the importance of getting nutrients from real food instead of from pills is that there are many unidentified nutritional factors in food, especially in fruits and vegetables. These phytochemicals that one doesn’t get in pills may provide a great health benefit.

There is nothing conclusive yet in the research of Bjeldanes and Firestone indicating that broccoli and other cruciferous vegetables will benefit the hair follicles, but I loaded up on broccoli at the market today just in case. By the way, the best way to cook broccoli and other vegetables is to steam them. Boiling vegetables destroys over half the nutrients; steaming destroys hardly any.

The following is from WebMD:

A juicy tomato has lots of antioxidants - but pair it with broccoli for the best health benefits.

Tomatoes are loaded with health-protective antioxidants such as lycopene, vitamin C, and vitamin A -- yet they have very few calories. If you don't have tomatoes in your summer garden, head to the local farmers market. Pick up some broccoli, too.

Research is homing in on broccoli's protective nutrients. It's steeped in important phytochemicals: beta-carotene, indoles, and isothiocyanates -- all cancer-fighting compounds. Broccoli also has phenethyl-ITC (PEITC), which is formed when the vegetables are either cut or chewed -- and has been shown, in lab experiments, to kill off cancer cells. 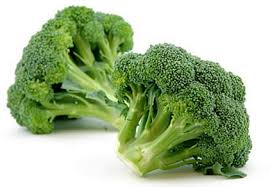 Both cooked tomatoes and cruciferous vegetables -- broccoli, cauliflower, and cabbage -- have been shown to help prevent cancer, especially prostate cancer. Now, research suggests that eating tomatoes and broccoli together has even more potent health effects.

A landmark study, published in Cancer Research, showed that prostate tumors grew much slower in rats fed both tomato and broccoli powder, compared to rats that ate either broccoli or tomato powder alone, or rats given lycopene as a supplement to their regular diet.