Rogaine (minoxidil) and Propecia (finasteride) are two drugs approved of by the FDA for the treatment of hair loss. Both of these drugs were originally developed for use in the treatment of serious illnesses: minoxidil for high blood pressure; finasteride for benign prostate enlargement (BPH).

Rogaine is a topical solution sprayed or massaged into the thinning areas of the scalp. The scientists at Upjohn Pharmaceutical who developed this drug are not exactly sure how it works, but they have some theories.

One theory is that because the drug is a vasodilator it might dilate the blood vessels in the scalp thereby increasing circulation to the hair follicles. Other drugs, also vasodilators, do the same thing, but these drugs don't halt hair loss or grow new hair. So there must be some additional active ingredient in Rogaine that promotes stabilization or regrowth of hair.

Another theory is that Rogaine might have a stimulating effect on skin cells in the scalp thereby allowing the hair follicles, specialized skin cells, to grow back to a size that may produce a healthy hair, a terminal hair.

And the third theory, the most likely one, is that Rogaine might have a beneficial effect on the hair cycle, keeping the follicles longer in the growing stage and perhaps shorter in the resting stage. This would give the hair a chance to grow longer and thicker.

The other drug Propecia was developed by Merck & Company. It's a pill. It's taken orally. Scientists at Merck say that this drug works by slowing down the conversion of testosterone into the more potent hormone DHT. It does this by partially neutralizing the enzyme 5-alpha reductase, the enzyme that catalyzes the conversion. Studies done by Merck indicate that patients receiving a pill with 1 mg of finasteride each day decreased the DHT in scalp tissue by almost 60 percent. DHT shortens the growing stage of the hair cycle and possibly harms areas within the follicle causing them to shrink (miniaturize). Read my article - DHT: the full story - for a detailed look at the benefits and the possible side effects of Propecia.

Both of these drugs are relatively safe, but if a person stops using them, all the benefits that have accrued from their use will disappear after a short time.

These drugs are effective in regrowing hair in the crown area of the head in approximately 35% of the people using them. (Effective meaning a moderate to dense growth of new terminal hair within one year.) There is no clear research yet that indicates that these drugs have much effect on the frontal hairline.

Rogaine can be used by both men and women; Propecia can be used by men only. A very small percentage of men on Propecia, perhaps one percent, will experience a lessening of the sex drive and a decrease in their ejaculate volume. These side effects will disappear once use of the drug is discontinued. (The hair that has been possibly regained will also disappear when the drug is discontinued.)

To summarize: Rogaine is a follicle stimulator, whereas Propecia a DHT inhibitor. Both of these drugs are legitimate, helpful drugs; there are perhaps hundreds of other drugs on the market that are completely useless.

Continue to - The Surgical Approach

Rogaine and Propecia are sometimes subject to "resistance." The body builds up a tolerance for these drugs. The effective dose after a period of time is no longer effective. This may happen because the body starts to produce more DHT or more of the enzyme 5-alpha reductase that converts free-floating testosterone into DHT. It has been estimated that almost 30 percent of the people who have been on Rogaine and Propecia for several years no longer respond as well as they did when they started on these drugs.

Read Minoxidil - a Hair Growth Stimulant by a man who calls himself Anagen. This is a good article about the strengths and perhaps weaknesses of this drug. Also click on this link to read about Minoxidil Side Effects Revealed - And 3 Better Natural Alternatives. When I read this sentence a few paragraphs down on the page - "The drug companies don't want you to know about this," - I thought that this would be another dumb article directed toward gullible people. But it's a smart article full of clear information. Thanks Sarah Hayward for writing it.

Some of the newer treatment modalities involve electrodes that stimulate the hair follicles into an almost kinetic state. There are some negative side effects with this treatment though. So you have to be careful. 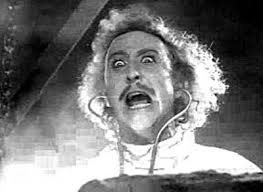